and get access to full InnMind Platform toolset
Analytics

The Dealbook of Ukraine 2016: the ultimate report about Ukrainian startup and venture scene

by Administrator, on Sep 11
This unique research represents a comprehensive compilation of the majority of deals conducted on the Ukrainian IT and Internet market in 2014-2015.

"The Dealbook of Ukraine: The Ultimate Report about the Ukrainian Startup and Venture Scene" was prepared and released by VC firm AVentures Capital in partnership with information agency Ukraine Digital News in August 2016.

As it is mentioned in forewords by one of the co-authors of the report Adrien Henni chief editor of Ukraine Digital News, by increasing market transparency, mutual trust and investment efficiency, this report is committed to become another contribution to supporting the emergence of a technologically-oriented and globally-integrated Ukraine.

The report is structured in six parts:

According to the report, in 2015 the Ukrainian venture market bounced back from its temporary setback of the previous year, with a record total investment volume exceeding $132 million. That number not only more than triples the $39 million of 2014, it also significantly exceeds the $89 million of 2013, then considered the best year ever for Ukrainian tech.

The authors of the report underline that in 2015 Ukrainian investors and funds committed a record $68 million, three times more than in 2014 and 25% more than 2013. Accounting for 52% of total committed capital, Ukrainian funds were nearly even with foreign funds, exceeding the latter by only $10m. The most active local funds in 2014-2015 by number of deals included Digital Future, AVentures Capital, Detonate Ventures, and CIG. 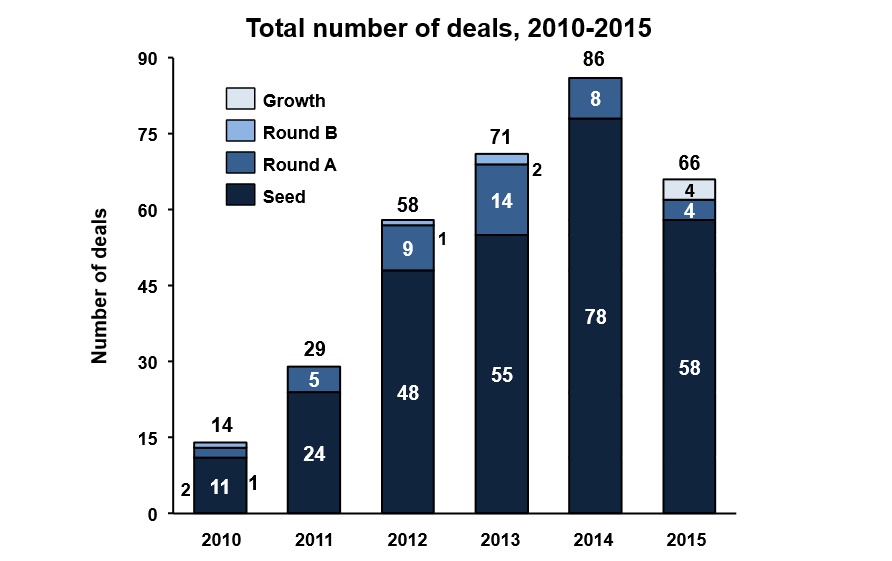 And it is not the only breakthrough on this year. Foreign funds and individuals invested a record $60 million in 2015, a twofold increase over 2013 and a threefold increase from 2014. The biggest deals of the year by foreign funds included the Soros Fund investment in Ciklum; Horizon Capital in Rozetka; TMT Investments in Depositphotos; Almaz Capital, ABRT and AVentures Capital in Starwind Software; InVenture Partners, Intel Capital and Finsight Ventures in Gilbus; and Almaz and AVentures Capital in Petcube. The most active foreign funds by number of investments included Almaz Capital and Imperious Group. 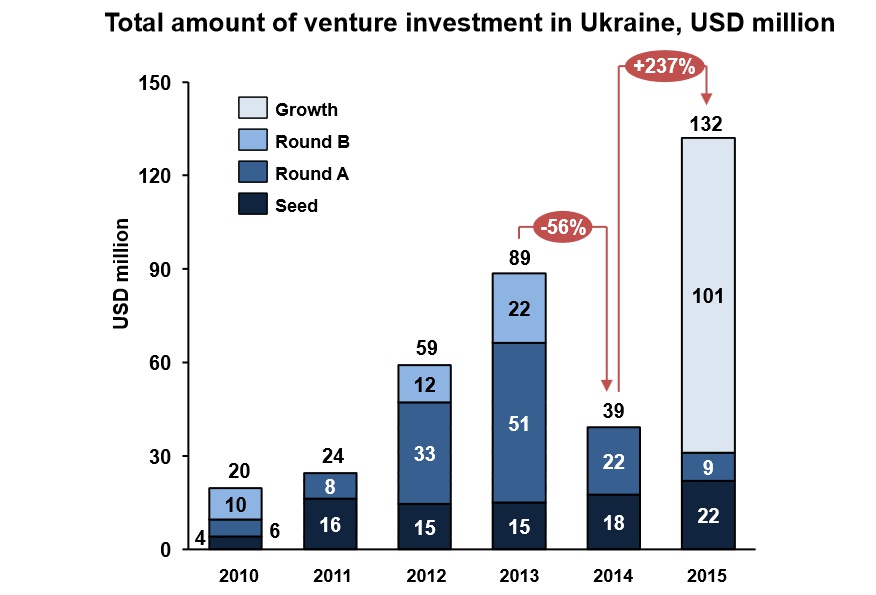 Among other key findings:

♦  After a short-lived decline in 2014, the Ukrainian IT sector demonstrated record growth in 2015. Not only did the market regain its strength, it significantly exceeded the activity level of any previous year, according to our research.

♦  The investment market reached an unprecedented $132 million in total volume in 2015, demonstrating a 240% growth from a year earlier, when the market shortened by over 55%.

♦  The growth of investment volume in 2015 was mainly the result of three large-growth stage deals, while early-stage investments slightly decreased. Growth-stage deals emerged as a new transaction class, accounting for $100 million of the total investment volume. Among notable new growthstage investors was George Soros, who promised to commit $1 billion to Ukraine – with the tech sector figuring on the priority investment list. Foreign investors kept interest in the Ukrainian tech sector, making or leading more than 40% of the funding deals in 2015.

♦  Startups oriented to the local market are likely to continue facing difficulties connected with the contraction of the Ukrainian economy and its currency fluctuations. However, there are also a number of winners that profit from such market conditions, including leading e-commerce players.

♦  Globally-oriented startups attracted more investment in 2015. Many of the teams have moved to their primary product markets, raised follow-on funding from international sources, and kept their R&D teams in Ukraine.

♦  Foreign investors kept interest in the Ukrainian tech sector, making or leading more than 40% of the funding deals in 2015.

♦  In 2015 Ukraine saw the continuation of the trend of well known foreign companies acquiring domestic startups offering global products. The year’s largest acquisition was that of the Looksery image-processing app by Snapchat for $150 million.

♦  Growth-stage deals emerged as a new transaction class, accounting for $100 million of the total investment volume. Among notable new growthstage investors was George Soros, who promised to commit $1 billion to Ukraine – with the tech sector figuring on the priority investment list.

♦  The 2014-2015 period was marked by a government push for reforms. The IT sector played a major role in the design and implementation of some of the most important reforms, including those addressing deregulation and e-government.

Read or download the full text of the report here:

The report "The Dealbook of Ukraine: The Ultimate Report about the Ukrainian Startup and Venture Scene" was provided for publishing on InnMind by InVenture Media Group.

by Administrator, on Jun 4

by Administrator, on May 28

What will happen with venture capital market, investments and startup valuations after the Covid-19 pandemic? InnMind asked insiders among the most active VC firms and angel investors.

Your idea of the future