and get access to full InnMind Platform toolset
Analytics

by Administrator, on Feb 14
Here is a detailed review of the global report “Global Entrepreneurship Monitor 2018/2019”

What environment is needed for successful entrepreneurship?

We found that data from the report  “Global Entrepreneurship Monitor 2018/2019” can give us an answer to this question.

This report marks the 20th anniversary of GEM and shares with its readers information about entrepreneurship around the world. In this report, you will find the results of the research that has 164’249 participants from 49 countries.

The main goal of GEM is to show a comprehensive picture of entrepreneurship development. The researchers explored entrepreneurs’ profiles including demographics, motivations and ambitions, as well as business characteristics such as the level of innovativeness and industry participation. In addition to that, GEM breaks down some popular but unsupported myths about entrepreneurship through different insights across survey participants.

In this report, GEM has coined the term Total early-stage Entrepreneurial Activity (TEA) as the entrepreneurial activity that is centred on the period preceding and immediately after the actual start of a firm.

The lowest TEA rates are in European countries and the North America region. That’s so because high-income economies can give people alternative job options and level of competition is higher that can make starting a business less attractive. Chile is an exception here: more than 25% of the population are starting or running a new business there.

In the Middle East and Africa, there is a dual pattern: many economies of this region have TEA rate under 12%. However, the highest TEA rate in the world is in Angola - 42%.

Below you can find more detailed information. 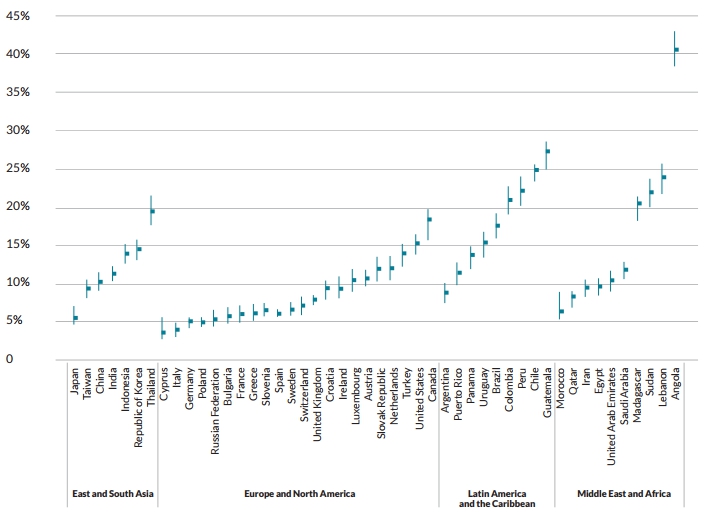 some customers and for which there are no or few competitors. You will be surprised to know what the economy is the most innovative. Chile shows the highest rate of innovation among new businesses - 48%. To a slightly lesser extent, Guatemala exhibits high rates combined with high innovation.

Among the Middle Eastern and African countries, Lebanon and Angola demonstrate substantial rates by virtue of high TEA rates.
The lowest rates of innovation level accompanied by low TEA rates are in Russia, Poland and Bulgaria - under 15%.

Below you can get more detailed information: 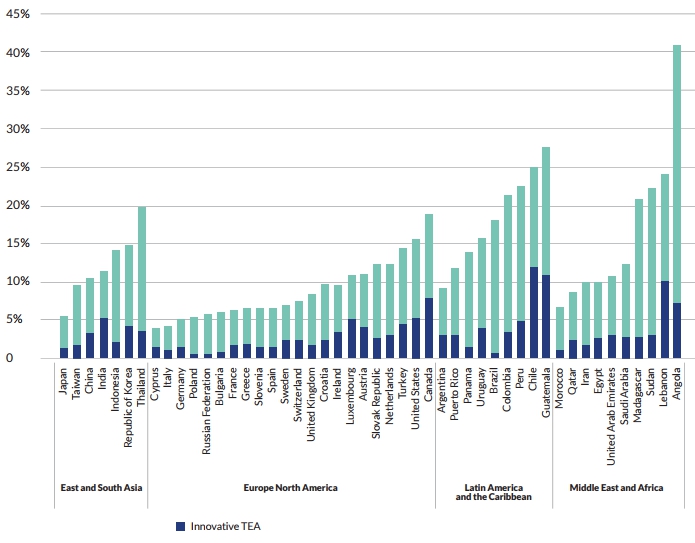 In the report, international entrepreneurs are those who have 25% or more of sales from customers outside their countries.

You may think that open borders in some regions such as the European Union help entrepreneurs to sell beyond their countries. GEM researchers found that some European countries use open boards but still there are more countries where entrepreneurs are selling products mostly to domestic markets. For example, less than 10% of entrepreneurs in Poland, Bulgaria, the Netherlands and Spain are international.

By the way, the most internationalized economy is Lebanon.

Look at the picture below to learn more about internationalization. 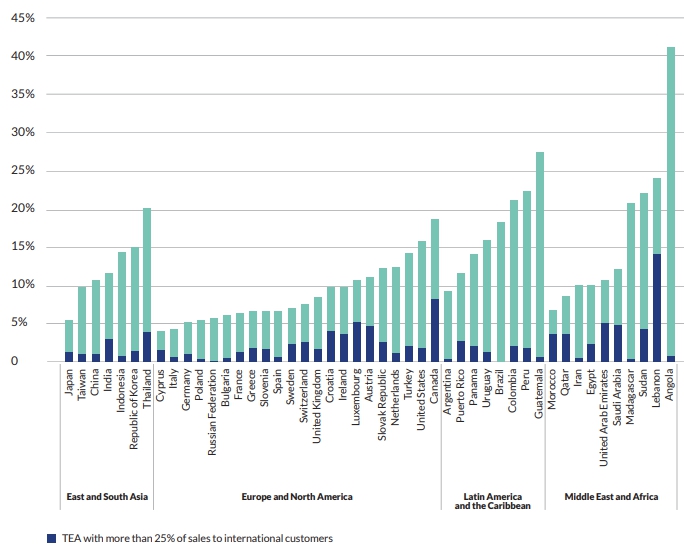 What is interesting is that the average prevalence of agriculture/extractive/construction businesses is relatively constant across income levels.

Look at the picture below to learn more 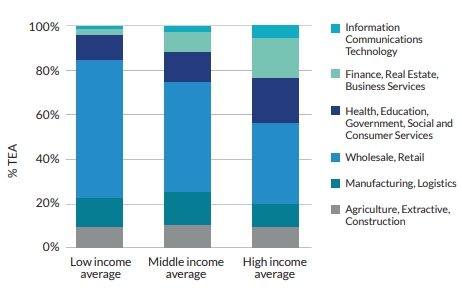 This way of entrepreneurship is especially popular in Europe. In Sweden, Germany and Cyprus, the rate of EEA is the same as TEA or even higher. Actually, the level of independent entrepreneurship in these countries is low. But in some other countries, such as the Netherlands, and Canada in North America, high levels of employee entrepreneurship complement high TEA rates.

You can find more detailed information about EEA below: 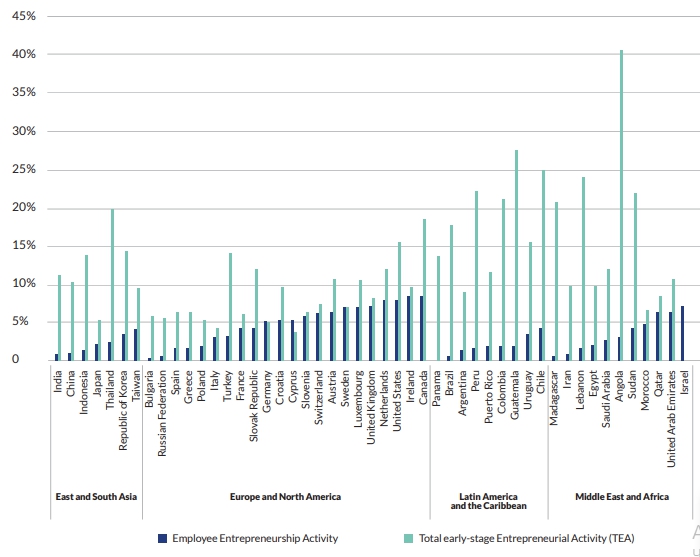 Entrepreneurs may discontinue a business for a range of reasons. In this part of the review, we will look at business discontinuance in different regions.

In most cases, discontinuance is highly correlated with TEA, meaning that the more new ventures there are, the higher is the chance that they stop existing. You can see it in the picture below: 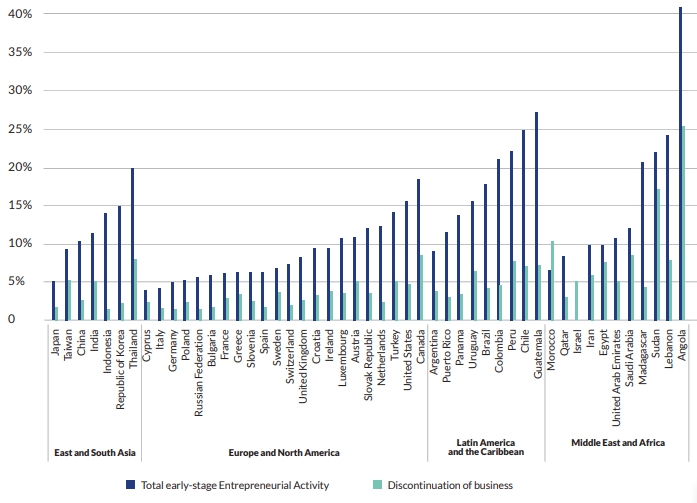 As for reasons why entrepreneurs stop the business, the main reason is a lack of capital. In the Middle East and Africa, this reason is especially common.

The second sustainable reason is leaving the business due to sale, retiring or another opportunity which opened in the market.

The bureaucracy is a comparatively insignificant reason to close the business but in Saudi Arabia, this accounted for 43% of exits.

Ease of starting a business

This feature is presented in this report for the first time.  The rate is based on beliefs of different people about how to start a business in their country. 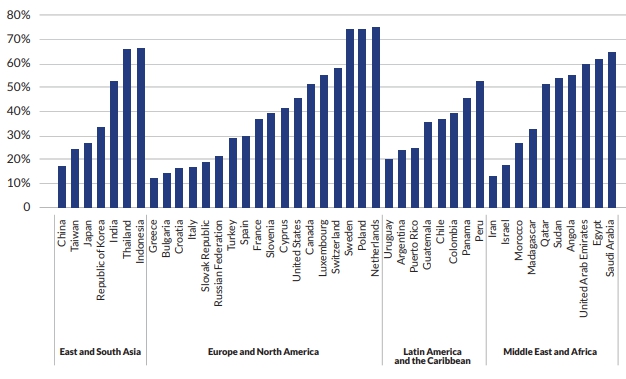 As you can see, the highest rates are in  Sweden, Poland and the Netherlands.

What interesting is that Sweden is a country where many people think it is easy to start a business, but fewer than half think that it is a good career choice. That’s so because there are more viable career alternatives and people don’t need to start a business. However, to some extent there is an interest in stimulating entrepreneurship in the society, this evidence shows that simply reducing barriers to starting may not be enough to compel people to do so.

In this report, researchers introduce  National entrepreneurship context index (NECI) to assess the environment for entrepreneurship in the economy. The NECI is derived from 12 framework conditions and weights the ratings on these conditions by the importance experts place on them.

As you can see, the East and South Asia region is ahead because there are 3 countries from top rank: Indonesia (2), Taiwan (4) and India (5).

The Middle East and Africa have a dual pattern: there are the highest rated Qatar (1) and Mozambique with the lowest rate (54). Europe shows almost the same situation: the Netherlands has  3 in the rank and Croatia has 53.

Summing up, let’s take a look at a couple of examples.

Angola is the leader in early-stage entrepreneurship activity and the leader in business discontinuance. Also, this country shows the highest rate of wholesale/retail business (74%) that matches to the low-income economy. And Angola took the 50th line in the NECI rank.

Another example, India (NECI rank - 5) that displays low TEA and stands out for its high proportion of innovative entrepreneurs.

Meanwhile, in Sweden, there are less independent startups. The population considers that it’s easy to start a business in Sweden, but many people prefer a career in the company.

Read new articles in our blog:

▶ The comprehensive guide on fundraising pitch

by Administrator, on Jun 4

by Administrator, on May 28

What will happen with venture capital market, investments and startup valuations after the Covid-19 pandemic? InnMind asked insiders among the most active VC firms and angel investors.

Your idea of the future